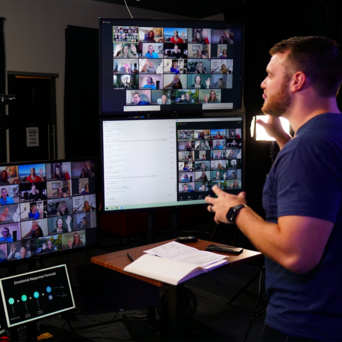 It is not often that a person can find total satisfaction with what they do in their life. Often, this is because they settle for what is safe rather than actually pursuing success and creating their future despite the fear of failure. David Waldy is one of the people who decided that the trajectory of his life was not what he wanted and decided to make significant changes to create more alignment and fulfillment in his life. He was always one to go against the grain and has spent his life intentionally pursuing options that have enabled him to write his own story. One of these options was in turning down a full-ride academy scholarship and choosing instead to attend a leadership school focused on ministry, personal development, team structure, habits, interpersonal communication, business systems, and leadership development.

Work Within Concrete and Glass Walls

David built a successful career in sales by working for a company in the transportation and logistics industry that operates worldwide. It was the kind of company that provided a script to follow to make sales. But David deviated from the script and ended up becoming one of the top 1% producers in this $400M per year company. His methods were recognized not only in the franchise where he was stationed but in the company as a whole.

After generating millions of dollars in sales, he was transitioned into a senior management role and began to coach and train some of the companies top-performing salespeople. At that time he was working 60-80 hours a week overseeing teams responsible for sales, marketing, and logistics. Through a seemingly unfortunate series of events, he ended up with a $40k pay cut, losing a child to miscarriage, suffering a massive betrayal in the workplace. It was during this time where he decided to begin looking outside the company to help others learn his unique approach to sales and marketing. Still working 60-80 hours a week at the company, he began to build his own coaching practice after hours and eventually, decided to quit his six-figure job and step fully into entrepreneurship.

Coaching Practice As A Full-Time Job

David realized that he had a unique edge when it came to sales and marketing. His methods and overall approach spoke more deeply to the clients’ needs and desires and it created powerful win-win situations. With a desire to broaden his understanding of the online space, he continued to expand his knowledge of sales and marketing by turning his attention to organic online marketing. Similar to the former company he’d worked for, he started to see significant problems in what was being taught in the online sales & marketing industry. Utilizing his unique edge, he started coaching more clients and his coaching practice began to grow. In time, he created a partnership and formed another company called Generation Impact Consulting, LLC.

He operates from a philosophy he calls “Fierce Empathy”, which allows him to see, hear and understand an individual beyond what they show on the surface. This philosophy enables him to gain insight into the tough questions we don’t often ask ourselves, often out of fear or ego. He seeks to challenge the existing paradigm and help others identify the areas where they can make small changes, create consistency, and experience explosive growth. He has spoken in front of thousands of people from across the globe on topics about sales, marketing mindset, online business, personal growth, habits, and business systems. He has also spoken, trained, and developed higher-level programs and workshops for some incredible industry leaders like Tony Robbins and Dean Graziosi.

Why He Believes In Empathy

David believes that connecting with a person on a deeper level allows him to serve clients better. He often asks questions about the past to better recognize who the person is and what they have been missing. With fierce empathy, he seeks to understand what you really want and then helps you extract what’s been inside you all along by asking powerful questions. He recognizes the patterns, habits, fears, and limiting beliefs that we often cling to and keep us stuck.

David believes that when you operate with fierce empathy, you empower others to create solutions from within, rather than seeking the answers outside themselves. He doesn’t want to just give someone the answer, because often they won’t own the responsibility to make the necessary changes and create the results they are looking for. He believes that a better approach is to truly see, hear and understand others in a such way that you are positioned to help them discover the answers for themselves through the process of you asking better questions.